CASTLE COMEDY AT THE ENT SHED

Castle Comedy is back at the Gordon Arms Ent Shed. The show will be an intimate return with only 60 tickets available to see some incredible comedians!

GARRETT MILLERICK - is an acclaimed stand-up comedian, writer and director most recently seen performing stand-up on the hit US late-night talk show Conan (TBS). He is also the co-host of hit podcast Laughable with Jayde Adams and Red Richardson which was recently picked by the Guardian as one of the funniest podcasts to listen to during the pandemic.
Garrett’s live shows ‘Sunflower’ and ‘Smile’ were some of the best-reviewed and most talked about shows of 2018 and 2019, both at the Edinburgh Fringe Festival and subsequently at London’s Soho Theatre. As a result, Garrett received a nomination for ‘Breakthrough Act’ at the 2019 Chortle Awards.

TONY COWARDS – aka ‘’The Punnasuarus’ is a rapid fire gag merchant with an arsenal full of one-liners! For laughs-per-minute, he’s tough to beat!
His quick wit and vast array of jokes has made him a sought after act and compere by comedy clubs and promoters across the UK and internationally. He is a regular feature in lists for 'Best Jokes' at festivals or Christmas and his Twitter account @TonyCowards is followed by 20,000 people!

"The best joke writer around" - GQ

SARAH ILES - is a charming and relatable storyteller. She mines her personal life for some joyous and hilarious tales.

PAUL REVILL will host the show.

NOTE: Line-ups are always subject to change due to circumstances beyond our control. You are purchasing tickets to a comedy night and not to see a particular comedian and as such tickets will not be refunded due to a change in line-up. 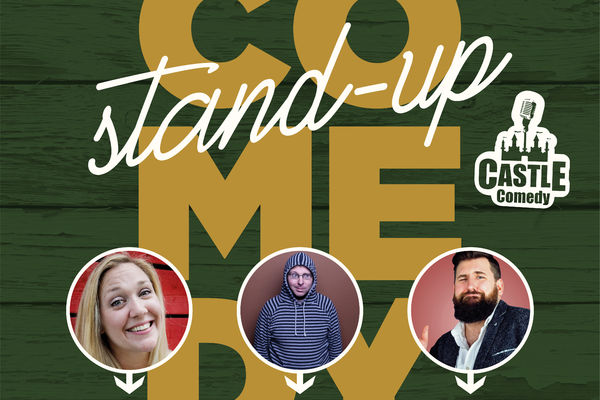 CASTLE COMEDY AT THE ENT SHED